Just in time for Halloween is the latest in a long line of Netflix success stories; The Haunting of Hill House (which I’ll refer to as HH from here on out!)

I’ll start off by saying it’s unusual for me to watch something so soon after it’s released as I’m not normally on trend with TV (for example I still haven’t seen Game of Thrones) however this one really caught my eye, firstly due to the buzz it was receiving online in forums and on social media and secondly because it was a new horror story to sink my teeth into. I’ve been dying for a creative, yet grounded horror show that doesn’t go completely off the rails, I use the film Sinister as an example of this, in that it begins as many traditional thrillers would and the plot takes you down several alleyways of intrigue before slapping you in the face with a lacklustre and anti-climatic ending. Since then I’ve been quite put off by the genre in its entirety, the recent iteration of It, however, did bring me back in and from there, Stranger Things followed. These aforementioned titles had horror elements in them but nothing to truly frighten me and keep me awake at night and the landing light firmly on, but HH did and in a big way.

Spoilers for the entirety of the show from this point onwards.

As a horror, HH absolutely does its job; it’s creepy, atmospheric and has a twist that will make your blood curdle and keep you awake at night for days on end. If you’ve seen the show, you know what I mean already; the Bent-Neck Lady. The mid-season reveal that the spectre haunting one of the children, Nell, is, in fact, herself blew my mind and I had to stop my binge for a good few minutes to process what I’d seen. Yet it wasn’t completely unexpected and that’s what the show does extremely well; it drip-feeds you information and allows you to make certain assumptions, without giving the game away completely. I personally thought the Bent-Neck Lady was the mother, Olivia, as we weren’t actually aware of how she died on that fateful final night in the house, so it wasn’t too much of a leap for my brain to assume she hung herself and was now haunting Nell, preying on her already fragile mind in order to coax her to her own demise (which was sort of true in the end, it’s the evil spirit of Olivia who literally pushes Nell to her death).

A trope of horror is that there will be no shortage of jump scares, which of course HH employs as well. But the way they’re done isn’t obnoxious or over-the-top, for nearly every occasion there is a solid storyline reason. One of the most memorable from the series occurs in Episode 8, where siblings Shirley and Theo are arguing in the car and in the middle of their frenzy, Nell pops up between them screaming (almost a “shut up) and then the car runs off the road and we get a truly tender moment between the two. The jump scare achieved the goal of not only making me wet myself but also driving the story further and adding additional layers to both characters, which is truly outstanding.

What else makes a horror truly succeed? The atmosphere. The sheer amount of unease I felt whilst watching the show simply cannot be rivalled in anything I’ve seen before. Even when there’s nothing to come of it, the way shots are filmed and how the music changes has you on edge and expecting something to happen when actually, nothing does. Take Episode 6 (Two Storms)  as an example. Apart from being a masterclass in cinematography, with a mere 4 cuts in the entire episode, one method of camera work is having the view pan around characters in a 360-degree arc, constantly showing in the background the open casket of Nell. I was viewing this with the constant fear that something would be by the casket (i.e. the Bent Neck Lady) on the next pan and as tensions between the family only escalated, so did my nerves and the anticipation for something to happen. This heightening of the mood was also elevated with darker music, which was very present in the series finale, the family really put through the proverbial mill during their time in the mysterious Red Room. 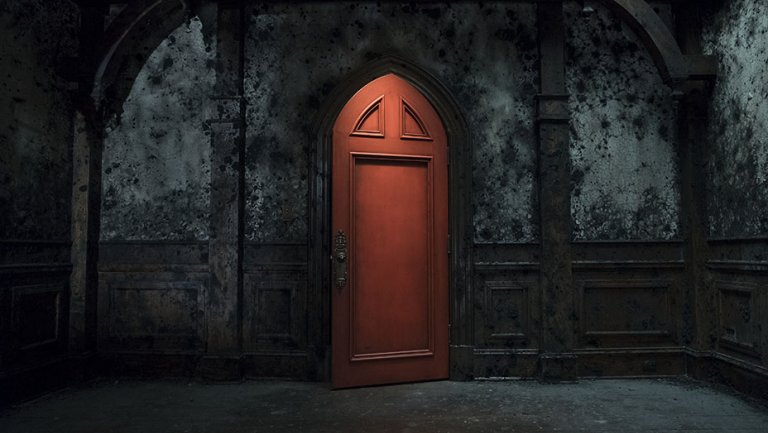 Speaking of family drama, the show certainly has no shortage of that. It’s this theme on which other details of the story are hung and allowed to develop, from jump scares mentioned above to truly heartwarming moments like the child versions of Luke and Nell speaking to each other about never leaving one another, it’s all allowed to feel more impactful due to the carefully woven dynamic between them all, that is shown not in a linear fashion, but scattered across time. For example, in Episode 1 you meet Luke the junkie and had the show continued with that progression of the character in a linear aspect, there wouldn’t be much room for sympathy or feeling when something happened to him. Grounding the show in this way kept the supernatural elements feeling legitimate and never too much, it was all believable and it was always relatable in one way or another. Yet the show does bend the rules of reality and treats time as nothing more than a plot device to be manipulated and as we learn more about each character, we become more understanding of their circumstances and therefore, more affected when something happens, good or bad. 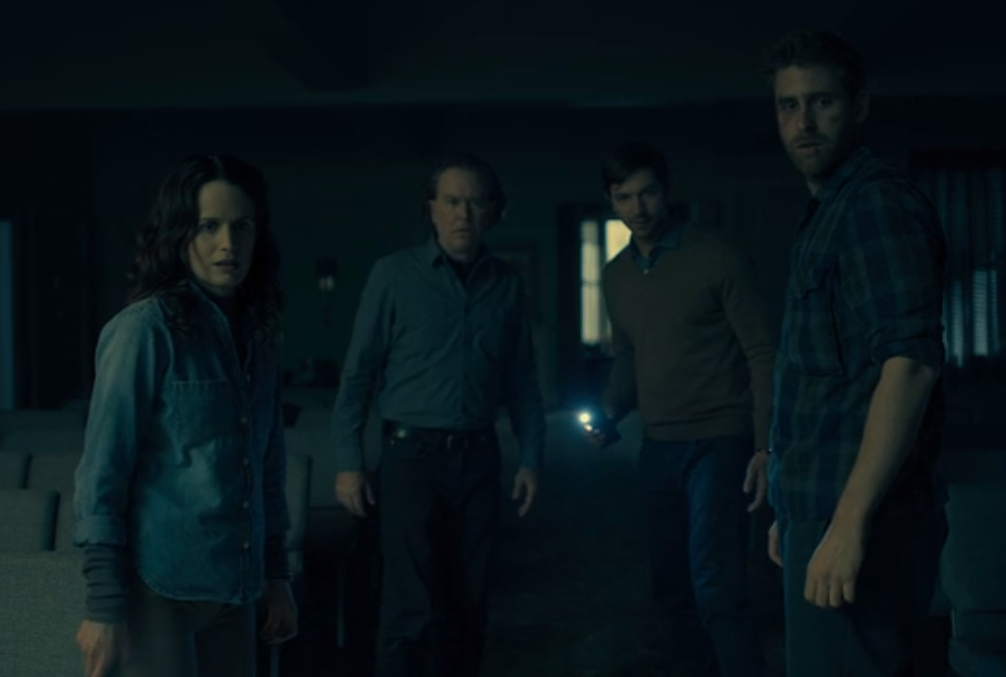 When tragedy does strike, in a big way with Episode 1 (further developed in Episode 5), it’s repercussions are felt through every family member and scenes thereafter (which occurs. On face value, it’s a tale of someone losing the will to live, with nobody to talk to about it. The show itself is arguably a giant metaphor for mental health and its issues that must be tackled, one of which is communication. This is shown when Nell is at her lowest, alone in a hotel room, calling various family members who all fail to answer her call or cry for help. The show succeeds here as a poignant reminder of the need to speak up about mental health and once again, touches on a subject many can relate to and empathise with, giving the series that much more depth and intrigue. 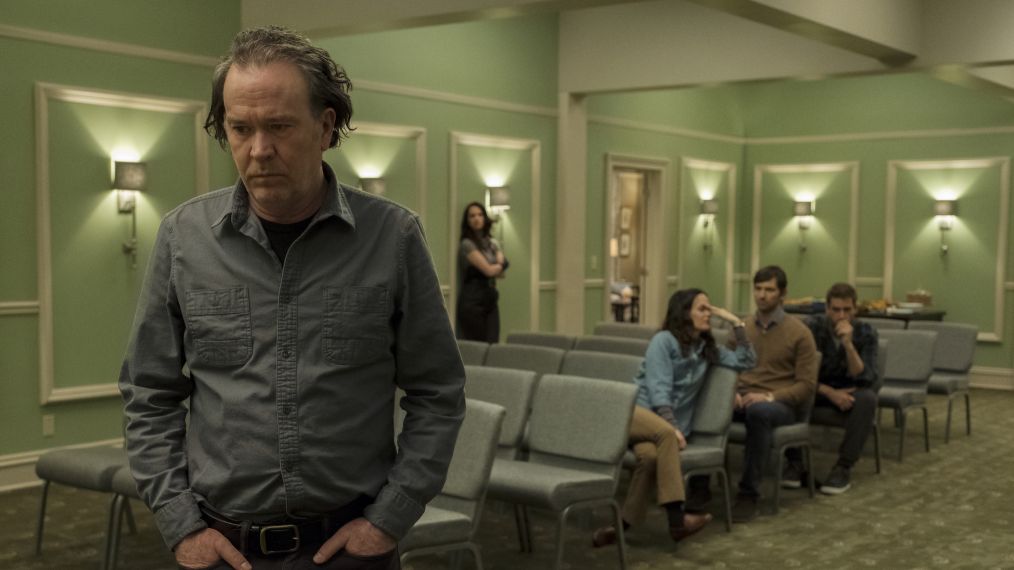 Another subject that branches off the family drama tree is Olivia (the mother) and her desire to keep her family safe from the horrors of the outside world. Episode 9 (Screaming Meemies) is where we get the case study of Olivia’s degeneration from typical housewife, to unstable and twisted phantom of her former self. The house manipulates her into believing the only way to keep her children safe from the jaws of life is to kill them so they can be in the house forever, safe and sound. The logic of this sounds incredibly flawed here, but the show twists the thought in such a way that, from a certain point of view, it can make sense and therefore, the “evil” mother becomes yet another tragic figure who failed to speak out about her problems and address them and ultimately, paid the price.

The Ending and What’s Next?

As we know, all good things must come to an end eventually and that, of course, is the case with HH. 10 episodes that took us on an emotional rollercoaster and the finale still had plenty to answer for and deliver. Questions lingered on about certain characters, aspects of the house and how the insatiable appetite of the house would be quelled. Now, while these questions were certainly answered and there were heaps of distressing scenes, the ending felt a little too happy for my liking. The house itself, which had been presented as a monster of its own accord, feasting on the lives of innocents, was suddenly turned into a benevolent entity that acted as a museum of sorts for dead loved ones that you could see at any time. Take the scene with Mr Dudley rushing his dying wife into the house as an example; yes it was beautiful and heartwarming to see his family completely reunited before his eyes, but where was the horror that was present before? The sense of dread that a ghost could be around any corner and startle both the character and viewer? It was gone and I believe, tarnished by this decision. This was further spoiled by the ending, which showed all of the remaining family members celebrating Luke’s two-year sobriety and with everyone seemingly living perfect lives. For my money, it would have been far more impactful to have this same scene play out, but as the camera pans out, there is the distinct window of the Red Room hovering in the background, suggesting that they are all still trapped (possibly dead) and this is just another fantasy cooked up by the malevolent house.

In spite of this, however, the show still stands firm in my list of “must see TV”, offering moments of incredible dialogue helped by show-stealing performances from many of the cast, otherworldly atmospherics that ramp up the tension to insurmountable levels and visuals that scare, enlighten and bring joy. I’ve been obsessed with the show since watching it and every episode had me craving for more, so despite a finale which could have tipped into a darker finish, it’s still an incredible ride that demands to be watched.

So what happens next? Nothing. Leave it as it is, a one and done. It would be simply impossible to capture lightning in a bottle twice and I firmly believe The Haunting of Hill House should remain the one season wonder that showcases the true diversity and range the genre of horror can provide.