When 7:30am rolled around, it was time to mobilise. With a last look cast upon my hotel room, I laughed to myself at the state of the bedsheets, courtesy of my spray tan (apologies Premier Inn for that one!) I travelled to the show once again with Tim and Lucy and we stopped off for a coffee at a really great place that was diet friendly, dog-friendly and on another occasion, would have been a nice spot to whittle away the day at. Yet there was business to attend to so with the last sip of our beverages, Tim was off to go and train and Lucy and I continued on to the Middleton Arena. We were hours early for the show to start, but Lucy, who was going to be the one announcing the event and playing the role of host, had to prepare her jobs and for me, it was time for spray tan round two. 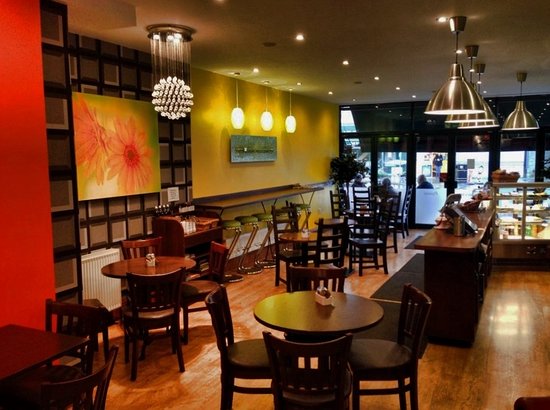 In order to get to where the tans were taking place, I had to walk through the auditorium where in a few short hours I would be showcasing myself to a few hundred people. Seeing the steep seating arrangement angled down to the barren stage made me feel nervous more than excited. I took everything in and tried to visualise myself standing at the front, exposed to all and running through my poses. There is simply nowhere to hide on the stage, all eyes are on you, even more so than the arena in Margate, as the seating arrangement there is relatively flat, so the gaze can wander a little easier. However here, I felt as if every single eye would be fixated on me when I did eventually arrive on stage and this really did make me feel, all of a sudden, very nervous. Pushing these thoughts aside though, I continued my mazy walk towards the tanning area.

This time the tan felt a lot less frantic, as there were far fewer of us around. I was specifically called in as the team wanted me to look darker. Now against the normal lighting of the day, the tan looks so dark and out of place, however once on stage, the benefits are clear, as muscle definition is enhanced and you don’t look “washed out” under the harsh lighting.  With the second coat applied, it was time to once again get back to the all-important waiting around.  I can’t honestly remember what I did with this time afforded to me; not much is the likely answer. The next item on our itinerary was registration and Athletes meeting, which is where we would receive our numbers (I was #47) and be informed of how the day would proceed, as well as getting some general tips on how to correctly eat during the day (i.e. don’t suffocate under a mountain of sweets in an attempt to fill out or look more vascular).

With the doors flung open to the public and stage appropriate clothing on, it was time for the opening Athletes Parade. Now I’m not sure if the intent here is to get everyone on stage in an effort to calm the nerves before going for your individual categories, but that is certainly what happened with me. I wasn’t nervous for the parade, however being out there, with the bright lights shining and the crowd roaring, it fired me up and squashed any thought of fear. I immediately loved it, the reception, the energy the entire feel was something I’d been craving for years and I was now excited for my categories. Straight after the parade was the Men’s Tattoo Muscle category, in which my friend John was competing. So I quickly threw a hoody on and made my way into the arena to see how he’d get on. He did so well and looked great out there and it was so pleasing to see this, as we’d been talking a lot in the leadup to the show about how we felt and what we were going through, it was nice to think that we’d made it here finally. With that done, I proceeded up the steps to sit with Ollie and relax a little. My first category, Beach Body, would be after the interval, so I had a couple of hours to kill first, but boy, did that time go quickly. Before I knew it, I was backstage, eating rice cakes and swallowing sweets (sour wine gums in case you’re wondering) and using my recently purchased resistance bands to pump up.

I thoroughly enjoyed the whole backstage process and got myself into a place where I was comfortable with how I looked, but not exhausted from the effort. When we were called up to line up for our grand entrance, I did get the nervous feeling again, however, it was mingled with excitement and anticipation for what was to come; this was it. Months of dieting, years longer of training and so much time consumed with my love for this sport and dedication to my body was about to be exhibited to all present in just a few short moments. I couldn’t wait.  I put myself into a different mindset altogether, I basically became a character. This character would walk on stage, brimming with confidence and prepared to show everyone exactly what he was about. With this mantra guiding me, I stepped into the light at the announcement of my name and ran through all that had been practised. I couldn’t really see the audience, as the lights were so bright and pointed directly at me, but I could hear noises of appreciation, as well as shouts of support. After completing my T-Walk routine, I waited at the back for the other competitors to finish their individual routines. What followed was us all being called to the front to execute our quarter turns, where we would be “posing down” in direct comparison with one another. Things can certainly get a little tight on stage and space is limited, so it’s vital to make your presence felt and give yourself as much exposure as possible. When the judges made their decision, we were free to go and the first of my three categories was completed. 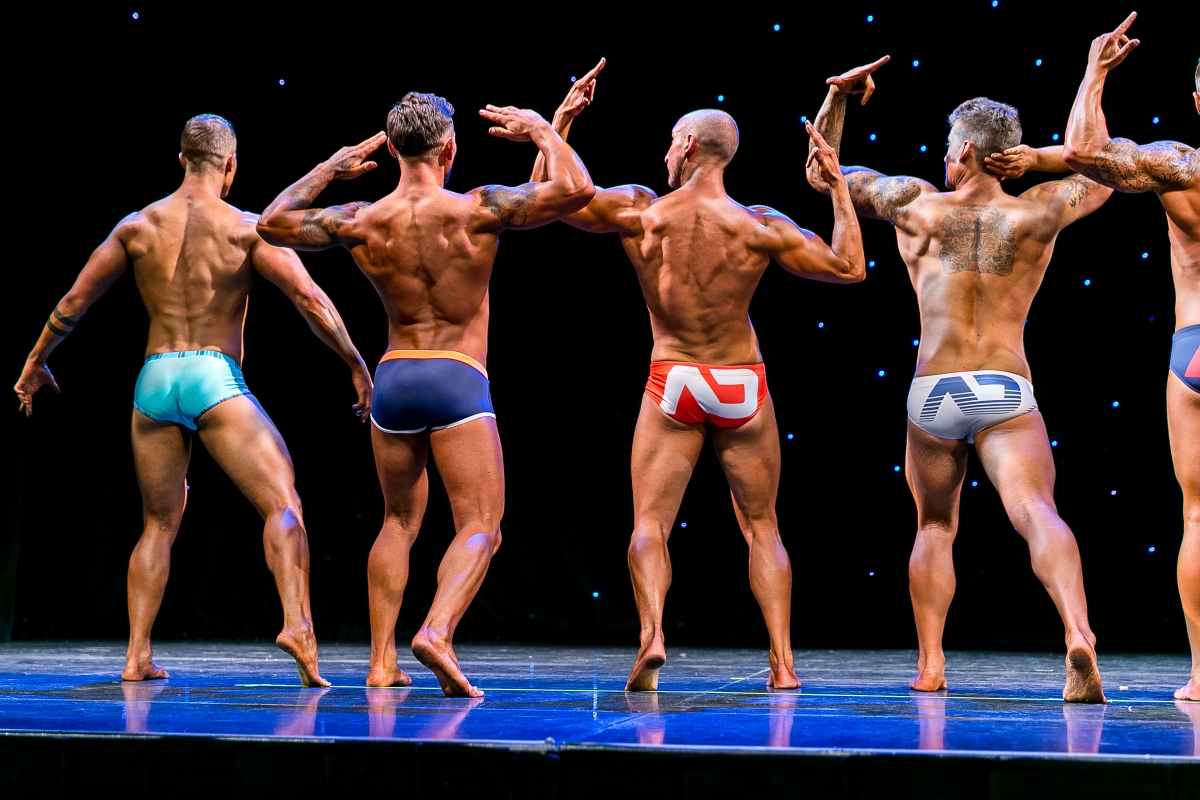 Next up, was Men’s Fitness Model Under 75kg. This was an extremely tough category, with some incredible guys involved. The process was the same as before, however this time I was first out. I had a lot of nervous energy, so I was literally bouncing up and down on the spot and focussing on the task at hand. If you’ve ever seen Brock Lesnar in a WWE ring when he’s being hyped up by Paul Heyman, it was this sort of “bouncing around” that I was doing, except I’m about 150lbs lighter than Brock, so probably not quite the same look. Anyway, as I said, it was largely more of the same as Beach Body, however, my wait at the back was extended due to the sheer amount of competitors we had. Let me tell you, it was excruciating trying to keep my entire body tensed and looking good for that amount of time. Eyes will always be on you, be it judges, audience members or other competitors, so just because you’re not front and centre, you need to still be keeping things tight and looking your best. When we were called forwards for our quarter turns, it was a relief for me as I had a moment of reprieve during the short walk. The standard was very high and we were kept on stage for a long time before the judges made their call and it was like a wave of pressure had been lifted off; the two “big” categories were done and now it was just International Model left. 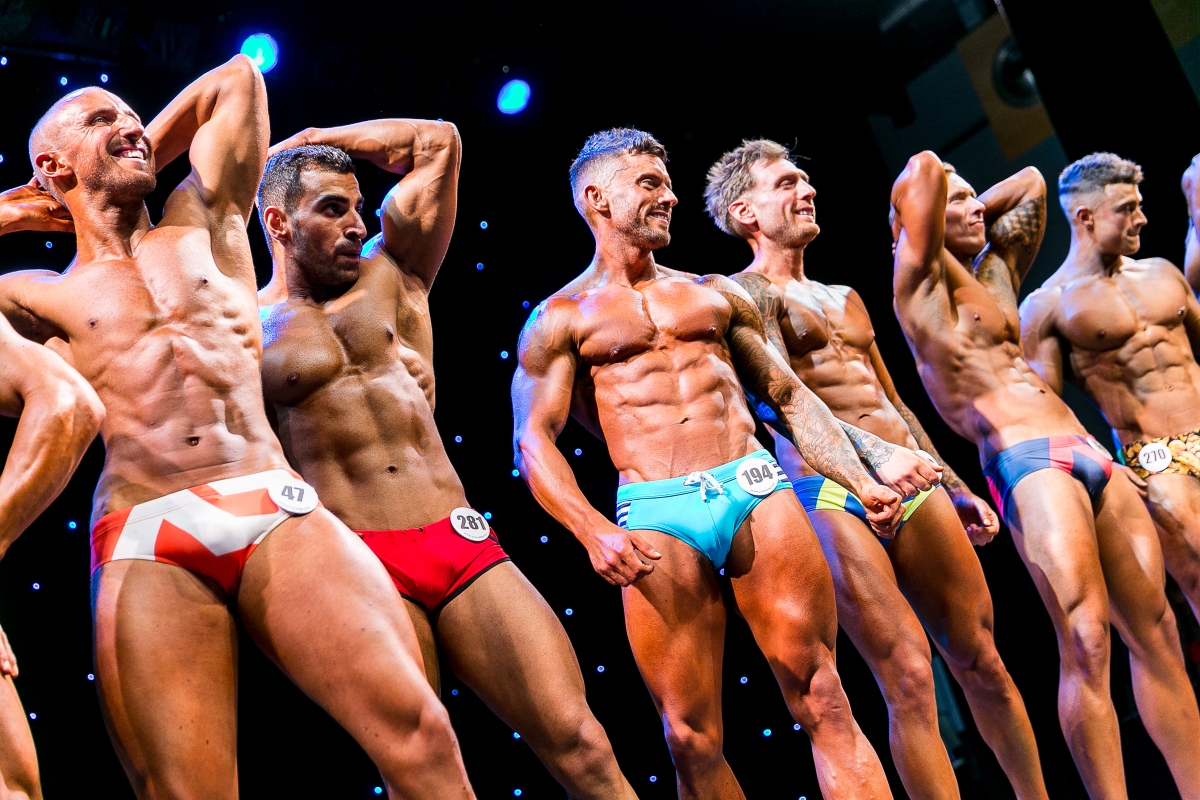 International Model is something I think every competitor should do. It’s so much fun, you get to come out all suited and booted, it’s a more relaxed posing routine and leans more towards a catwalk style presentation than the aforementioned T-walk. Here is where I got the best crowd response, likely due to the fact that I was in a pretty sharp suit if I do say so myself and also because I was absolutely loving every moment out there. I think that translates to the crowd and people can feel whether you’re genuinely enjoying it, or faking the emotion. Before stepping out, however, it was a real mad dash to get ready, as the International Model is split over two rounds. First round you walk out in underwear, however, the second round requires evening wear (typically a suit) to be thrown on in record time, which adds another dynamic to proceedings! After an exhilarating round, it was results time and International Model category was up first (so we could stay in the suits.) 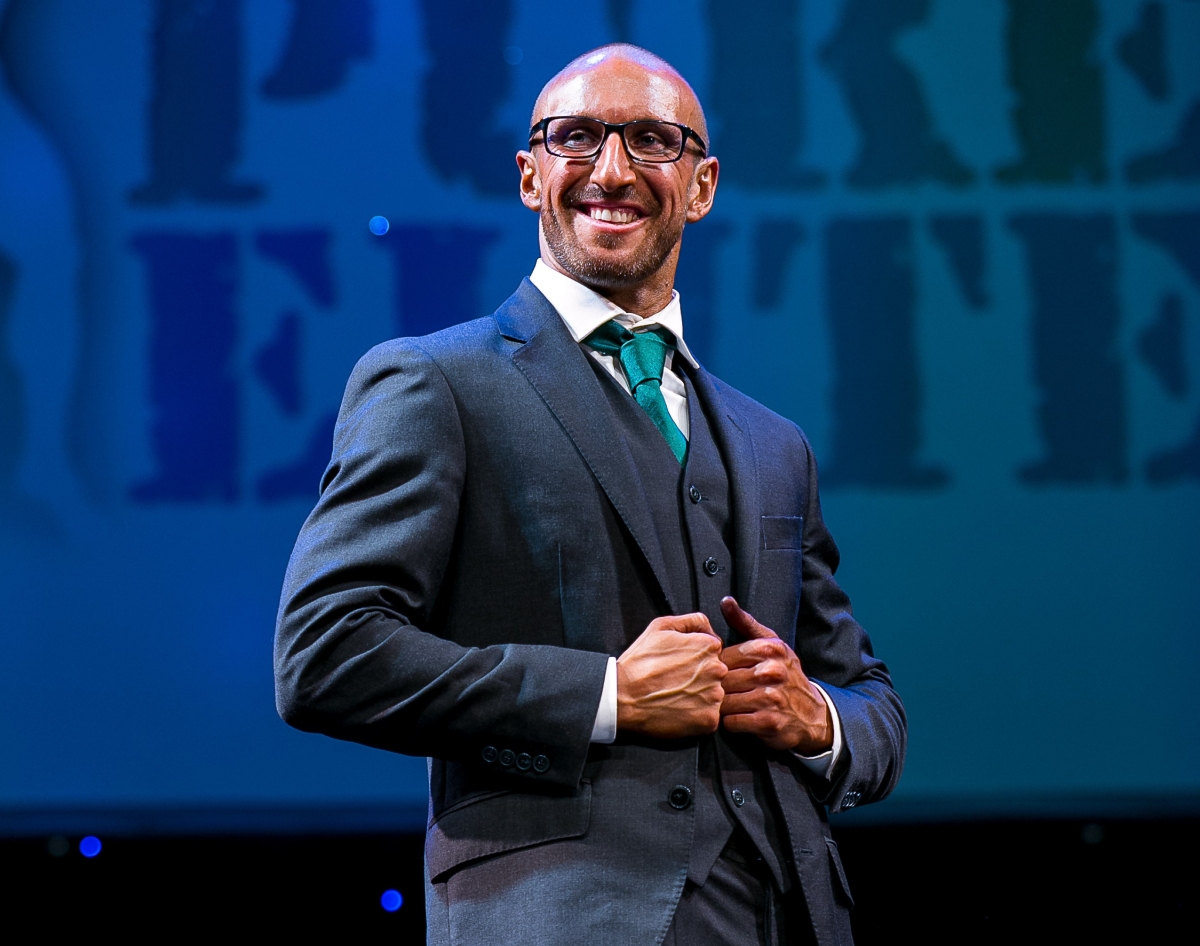 So, how did I get on? I placed Top 5 in Beach Body, I came 2nd in International Model and I didn’t place Top 5 in Fitness Model. 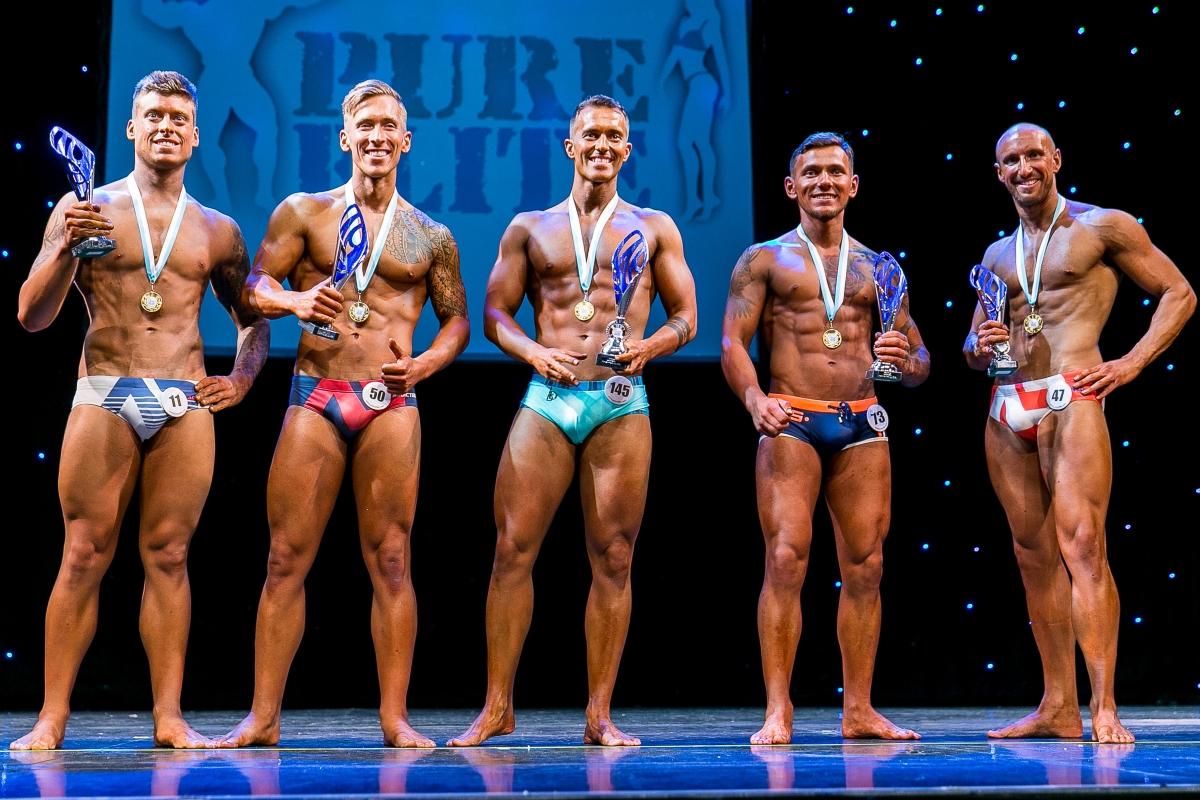 Am I happy? Reasonably so, yes. I think it would be remiss of me to declare myself unsatisfied with the results, as this was my first show after all. At the end of the day, I’ve come home with two trophies and lots of fantastic memories, which is certainly enough for me. It’s given me the spark to better myself further, come back and see what I can do.

What’s next then? Well, after the show I had a photo shoot with the very talented Matt Marsh at my local gym in Sutton, GoGym. This was another chance to don the spray tan, get my muscles out and see what I could bring and I’m very happy with the results. From here, there’s plenty of opportunities to showcase myself within this industry, so it’s a case of being patient, planning ahead and seeing what works best for me. In terms of competing, the plan is to go again in April, which gives me ample time to craft and hone a better overall shape and bring a tighter package to the stage.

So with that, it’s time to draw a close to the Prep Diaries for now. There’s no more show, no more diet, just back to the grind, back to working hard and keeping myself moving forward. One thing you can guarantee is that I’ll not be standing still or settling for mediocrity, not a chance in hell.