By now, I’m fairly confident everyone has seen the blockbuster hit Avengers: Infinity War and some of you might be on multiple viewings (I’m on three and counting). It’s an incredibly enjoyable film that serves as the first act in a two-part conclusion to over a decade of world building and movies from Marvel Studios, and for me, it hit the nail firmly on the head when it comes to entertainment,  amazing action sequences and sheer fun. It also did very well at raising the stakes to hitherto unseen proportions (yes I did really just say hitherto unseen) as well as bracing the audience for the inevitable; the Marvel Cinematic Universe (MCU) is set to change, and drastically. These films have essentially been a big budget TV series strung out across ten years. The so far untitled Avengers 4 will be the end of “Season 3” and this is where the bell of change will be rung.

What Do We Know?

Speculation is, of course, nothing without some facts to fuel the fire and in typical Marvel fashion, we don’t really know anything about how Avengers 4 will unravel. We do know however that we’re getting two films beforehand; Ant-Man & The Wasp and Captain Marvel, the latter of the two will become significantly important to the plot and outcome of the Avengers film. Before that though, the latest Ant-Man instalment should be the lighthearted relief we all need after the gut punch that was the ending of Infinity War, the trailers so far have leaned on the comedy aspect of the movie, which will surely be delivered in spades. As for Captain Marvel, not much is known at present other than it will be set in the 90’s, which likely explains the modified beeper Nick Fury whipped out at the end of Infinity War’s post-credits scene to contact Captain Marvel.

90s tech with some “alterations”

So with those limited facts in place, let’s start with the next film set to come out; Ant-Man & The Wasp. As already established, this will be the comedic relief we require post finger snap. It’s also fairly obvious that the majority of this movie will take place before or during the events of Infinity War, however, I have a feeling that the end of the film could line up exactly with Thanos’ snap and we see one or more of the characters fade away. My feeling is Wasp gets turned to dust and this is what sparks Scott Lang to join up with the remainder of the Avengers in the fourth film and figure out a way to un-do what Thanos achieved. (More on this later).

Now for Captain Marvel. I’ve got a basic knowledge of her power set from the comic lore, but essentially she could stop the Hulk with her little finger. The point is, she should be a match for Thanos. Delving a bit further into the comic book backstory, in the original run of “The Infinity Gauntlet” a character called Adam Warlock gets hold of the Infinity Gauntlet that we saw Thanos equipped with, and manages to put a stop to all of the conflict. While this character has been teased and confirmed by Guardians director James Gunn, his absence from Infinity War makes it unlikely that he will feature in Avengers 4. Instead, I think this role will be given to Carol Danvers; Captain Marvel. Similar to Warlock, Danvers has been missing in action and I think it’s a fair assumption to think she’s locked in a cosmic conflict far from Earth (hence the strange appendices on the beeper Nick Fury used). But why haven’t we seen her yet? Surely if she’s so powerful, she could have quelled the events that took place in New York and Sokovia with relative ease? This is my lingering question heading into her solo movie and one that I’m sure will be answered, but my instinct is to assume her adventures take utmost priority over Earthly matters and Fury was quite content to let his Avengers deal with the threats to Earth, until now.

Captain Marvel – The one to save the day?

Circling back to Ant-Man and how he can be a catalyst for change for Avengers 4; there have been leaked set photos showing Ant-Man, Tony Stark, Bruce Banner and Captain America in what looks to be New York and more specifically, set during the crisis of the first Avengers film. So what on Earth is going on there? Well, diving further, the team appear to be using a device affixed to their arms, and I have two theories on this. The first and perhaps more boring is that they are using Tony’s BARF contraption to re-visit the event and see if there are any clues as to how to take down Thanos, which is plausible but not as exciting as my second idea; they’ve gone back in time using the Quantum Realm. If you recall from the first Ant-Man, the Quantum Realm is a dimension accessed by the original Wasp who shrunk herself to sub-atomic levels in order to disable a Soviet missile; the price paid was heavy, however, as she continued to shrink for all eternity in a realm where space and time are irrelevant. Let’s stop there and focus on that part; if space and time are meaningless than it’s not a stretch to imagine this strange dimension can be used as a tool to travel back in time if manipulated correctly. I believe there will be a plot within Ant-Man & The Wasp whereby Hank Pymm (the original Ant-Man) will again embark on a journey to find his long-lost wife and thus open the door for exploration within this fascinating realm. Leaping further still, the attachments on the arms of the Avengers seen in the set photos could be the tools that they have used to enter the Quantum Realm and thus go backwards in time, again to learn about Thanos or even re-write history, perhaps destroying the mind and space stones that were present on the battlefield that day?

Ant-Man delving into the Quantum Realm

What About the Dead Heroes?

“Mr Stark… I don’t feel so good.” We all got a lump in our throats when Peter Parker croaked out these words as he was about to fade away into nothing, followed by an emotional breakdown and desperation to cling on to life before Spider-Man was wiped out before our eyes. Once he and Black Panther were “gone” I knew this would be reversible. There’s simply no way Marvel axe two of their biggest stars right now, plus Spider-Man 2 has already been announced and while yes, plans can change, it’s unlikely that particular one will. So this is where things get somewhat tricky. To my mind, it’s difficult to undo all of what Thanos achieved without completely undermining him and his efforts and the struggle of the first act of this two-part conclusion. There needs to be a satisfying way to bring back the newer Avengers, but before that, let’s remind ourselves of what happened. Thanos snapped his fingers and our heroes turned to dust. But briefly, before the dusting happened, Thanos was transported into the Soul Stone and came face to face with Gamora. What does this mean? Is Gamora still alive? How did she end up in the Soul Stone? Let’s take a pause here and rewind slightly. Again I’m going to lean on the comic lore here for some explanation. Within the pages of the story, the Soul Stone actually houses the Soul World, which is where many of the heroes get trapped, and where the aforementioned Adam Warlock actually resides and eventually joins up with those locked in this dimension. So if we take that information and apply it to the current MCU, I think it’s entirely possible that our “New Avengers” will be locked in here, along with the rest of everyone else who died and will figure out a way to get out, thus giving them their first chance to bond and gel as a team. One such hero, Doctor Strange could well be the link tying in all of the teams; he can astral project his form to Tony Stark et all and they can concoct a plan together to get free and finally all be united against Thanos instead of fractured divisions attempting to attack the Mad Titan in isolated pockets. I think this is where we’ll get the ultimate money shot of the entire ensemble of heroes standing together against Thanos with the Avengers theme blaring in the background. 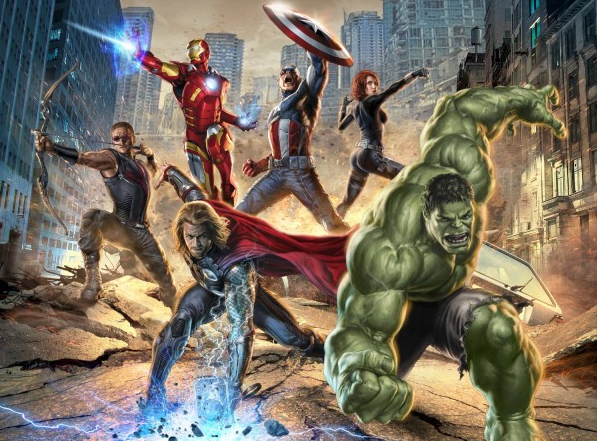 How Does it End?

While we’re having this epic faceoff, I think this will be the introduction of Captain Marvel and she’ll rip the gauntlet straight off of Thanos and wield it herself, banishing the Titan away using the power of the Infinity Stones to reverse the damage caused, before herself removing the gauntlet and taking it away for safe keeping. I think the team deserves a heroic send-off like this and the film could end on an overwhelmingly positive note, with all of the team gathered at Tony and Pepper’s wedding before the old guard such as Captain America, Tony Stark, Black Widow, Thor and Hulk bow out gracefully to usher in the new era of Earth’s Mightiest Heroes. Conversely, however, it could go the other way in the form sacrifice. Perhaps the Soul World requires a trade of sorts and thus the heroes must sacrifice themselves to save the new crop, i.e. Tony Stark for Peter Parker, Steve Rogers for Bucky etc. It’s a darker variation of the above, in that the old guard still get to bow out, but I don’t think this will be happening, as it could cause a certain amount of resentment for the new team as they would only be there because one of our favourites had to go.

Alright, those are my big thoughts, but here are some other quick things I think could be happening;

That about wraps it up. I adored Infinity War and I can’t wait to see the conclusion to this thrilling saga, I truly have faith that the writers and creative team will do it complete justice and we’ll be able to look back on this past decade in years to come as a truly amazing period of cinema history which took the comic book genre out of obscurity and into the mainstream.